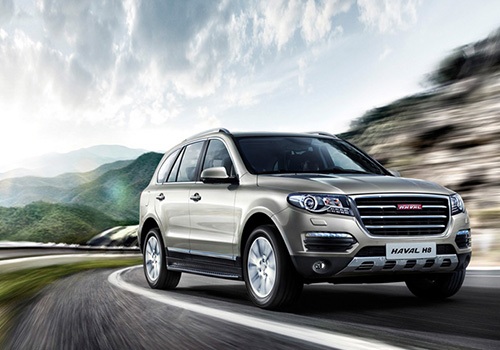 Haval H8 to appear in Hollywood blockbuster The Expendables 3

Hollywood blockbuster The Expendables 3 has recently wrapped in Bulgaria. The producer has confirmed that a Chinese auto brand will appear in The Expendables 3, which is exactly Haval H8 newly launched GWM.

The Expendables, presented by Lions Gate Entertainment, written and directed by Sylvester Stallone who also starred in the movie, brought together a galaxy of action stars, achieved worldwide success and set off a wave of return of traditional action movies. The previous two sequels of the Expendables fetched 600 million US dollars worldwide, including 560 million yuan from China. The Expendables 3 is set to hit the big screen in North America and the UK in August 2014. It will go on release in China in September 2014.

The Expendables 3 starred Sylvester Stallone, Arnold Schwarzenegger, Jason Statham and Jet Li familiar to Chinese audience. They will continue their roles in the previous two sequels. The hit was co-directed by Australian director Patrick Hughes who once directed Red Hill and veteran director Dan Bradley. Bradley once directed hits like Bourne Identity franchise, Mission Impossible: Ghost Protocol and Quantum of Solace. Producer Les Weldon said, "Haval H8 from China will appear on the way of the expendables to seek new members against the enemy."

According to the producer, steering outstanding and reliable Haval H8, the Expendables led by Barney Ross (played by Stallone Sylvester) and Lee Christmas (played by Jason Statham) accomplished one seemingly impossible mission after another against Conrad Stonebanks (played by Mel Gibson) who co-founded the Expendables and subsequently became an arms trader.

According to the producer, Haval H8 used in the filming in Bulgaria is the first Chinese-branded vehicle contacted by the production team of The Expendables 3. With mighty and manly appearance, the vehicle well matches the tough guys in the film. During the filming, both the actors steering the vehicle and the crew thumbed up to it. The producer said, "I never thought Chinese vehicles are so fabulous! As a matter of fact, during the filming, we saw a lot of Great Wall vehicles on European streets, that were awesome."

Referring to the cooperation, a person in charge of GWM's Haval brand, "The cooperation with Hollywood is our maiden attempt, we chose The Expendables 3 because of the spirit of challenging and sense of responsibility upheld by the film featuring tough guys, which is exactly what Haval brand pursues. Hollywood film culture spreads all over the world and Hollywood commercial hits have played a significant role in the Chinese film market. The success of the previous two sequels of The Expendable franchise has won it crowds of loyal high-end viewers and fans. The cooperation will provide strong support for the successful popularization of Haval H8.

As the first medium & high-end luxury SUV of GWM's Haval brand, Haval H8 has created new upgraded standards for SUVs of the same prices by its professional SUV platform, efficient power, quality design and intelligent technology, achieved the perfect combination of drive fun and utility in terms of maneuverability, comfort and through capacity, drawn close attention from market and consumers, and was recognized by the industry as a masterpiece by which Haval marches towards the high end and builds an internationalized brand.